Some Notes on Martin of Tours & his Epoch (c. 316-397): The Age of Constantine, the Arian Movement and the Burgeoning of Christian Monasticism

In the attempt to reconstruct the life of a saint, especially one as popular as Martin of France, we must take care to distinguish between fact and fiction. Hagiographies in the Christian tradition tend to embellish and sometimes exaggerate both the character and the deeds of their subjects. This is particularly true for the life of Martin. Hundreds of churches and schools have been named in his honor, not only in France and Europe but also throughout the western hemisphere. Popular literature blends with legend in his exaltation, a saint who was well-travelled and whose life was occasionally dramatic.

The fountainhead of ancient biography about Martin is the Sacred History, book two, of Sulpicius Severus, a popular spiritual writer of the late fourth century and a contemporary of Martin. Sulpicius also composed a work entitled On the Virtues of Blessed Martin. The latter was written and published in its subject’s lifetime. Also, a letter of Sulpicius to a presbyter Eusebius survives. Another to a deacon Aurelius and a third to Bassula, speak of Martin’s death. All these texts were composed in Latin, the language of Martin’s age and culture. The style of the Sacred History of Sulpicius Severus is highly rhetorical. Its purpose is deeply honorific. Some of these important documents are available in English translation. Surveys of their contents and discussions of their significance can be found in The Oxford Dictionary of the Christian Church, The Oxford Dictionary of Late Antiquity and the older Dictionary of Christian Biography and Literature.

About the year 316, during the reign of Constantine the Great, Martin was born at Sabaria in Pannonia, now lower Hungary. His father, a tribune in the Roman imperial army, was eventually stationed in Pavia, Italy. Despite the favor the emperor was showing to Christianity, neither of Martin’s parents was a baptized Christian. During his youth, Martin nevertheless pursued the spiritual life by associating with churches and monastic communities. At the age of ten he attempted to become a catechumen of the church, apparently against his parents wishes. The tribune intended to redirect his son away from such ethereal aspirations. Regardless of his family’s disapproval, and in what must have been an adolescent tug-of-war, Martin persisted in his practices of private prayer and learning.

By the age of fifteen his father had enrolled him in the legions as an understudy in the officer corps of the cavalry. He served initially for three years, until the age of eighteen, then for another three or four, winning the trust and respect of his fellow soldiers. He continued to show austerity in his Christian practices throughout this phase. During this stage can be placed the famous incident of his encounter with the freezing beggar. Near the city of Amiens, while traveling with military companions, the group was supplicated by a beggar at the gate, to whom only Martin responded. Not having any coins, he unsheathed his sword and divided his military cloak, giving half to the indigent man. That night, as later reported, Christ appeared to him in a dream, wearing the half-cloak. Martin interpreted the dream as a summons to Christian baptism.

Martin eventually resigned his commission in the Roman army and entered civilian life. Several later stories tell of the hardships he had faced as an officer dedicated to justice and the highest standards of military professionalism, virtues he owed to his Christian convictions.

About the year 336, or within a few years thereafter, Martin visited bishop Hilary of Poitiers, with whom he remained for some time. Hilary, a leader celebrated for his faith and a strong advocate of Nicene orthodoxy against Arianism, attempted to ordain Martin a deacon but Martin refused, claiming he was unworthy. He did accept the office of exorcist, a ministry grounded in much prayer and holy living.

During this period Martin felt compelled to return home to Hungary in an attempt to convert his parents to Christianity. In crossing the Alps he was captured by a robber band and pressed to confess his faith, which he did. Reminiscent of older religious stories, it is said he converted the leader of the criminals. Once in Hungary, he succeeded in winning his mother to Christ, although his father remained unmoved. He also won other converts in that Arian stronghold and was persecuted for his Nicene faith (Prayer Book, 358), finally being forced to flee.

In returning to the West he traveled through Rome, seeking Hilary there. Bishop Hilary was at last recalled to Gaul, for which Martin also set out. Five miles outside the episcopal city of Hilary, Martin founded the first monastic community in the province. His cloister became known as a model of compassion, humility and charity. 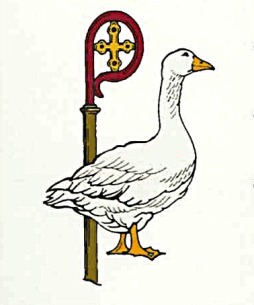 In the year 371, Martin was forcibly appointed Bishop of Tours. The narrative of his call is amusing, in that several detractors objected to him on the grounds of his personal appearance, especially his shabby dress and unkempt hair. It is probably impossible to determine if the legend of the geese is factual. One of the symbols of Saint Martin throughout the centuries, has been the goose. This stems from an anecdote about his having attempted to hide from those recruiting him to the episcopacy in a gaggle of geese, or behind their pen. Accordingly, the geese honked and gave away Martin’s position. Martin had obviously forgotten anything he once knew about retreat tactics.

Martin’s service as episcopus was grounded in his monastic practices, especially prayer, worship, care for the poor, and an overall emphasis on compassion. He objected strenuously to the handling of the case of Priscillian, certainly to its extreme outcome. The bishop Priscillian of Avila is remembered as the first heretic to receive the death penalty for his activities, setting the stage for the medieval practice. Martin is reported to have broken communion with the officials who prosecuted the case and who issued the execution.

A focus of Martin’s ministry as bishop was his mission to convert the non-Christian population of his diocese, an outward impetus. This he pursued tirelessly. He died surrounded by his clergy, his friends, and his admirers in November 397. His feast day was established as November 11.

Martinmas, or Saint Martin’s Day, November 11, is celebrated the world over. It is associated with the harvest season and includes the blessing of wine, grain and pork. Martin remains highly venerated in France and along with Denis and Joan of Arc has shared the patronage of the country. Countless churches have been dedicated to his name. The city of Tours is a pilgrimage site along the road to Santiago de Compostela. He is considered a patron of riders, soldiers, tailors, beggars, geese, horses, innkeepers and vintners. Courage, compassion and humility are principal virtues expressed by his life. Significantly November 11 is also Armistice Day (1918), when the First World War was drawn to a close.